Aggressive Roosters: What You Need to Know & How to Handle Them 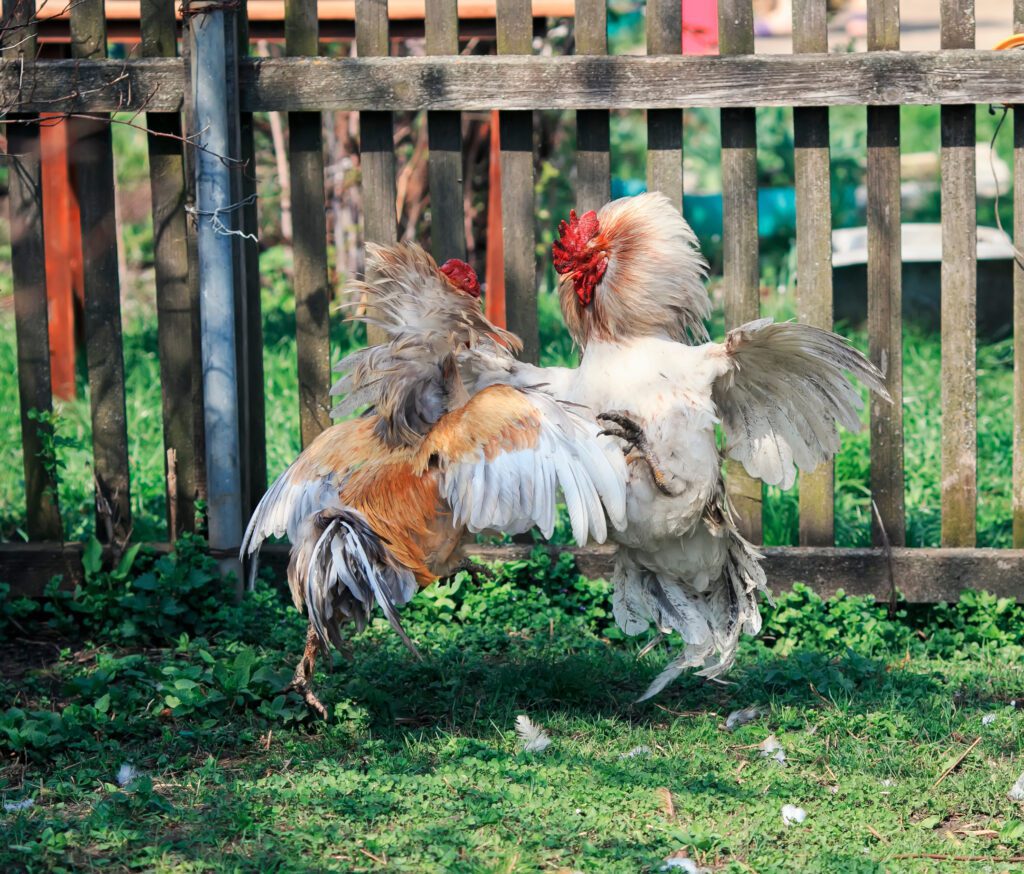 Of all the challenges you imagined you’d face as a backyard chicken keeper, aggressive roosters may not be one of them. You probably pictured an idyllic scene where your chickens happily roam around your yard, you go and collect the eggs and feed them, and everything is hunky-dory. So, when facing a rooster who is aggressive towards hens and humans, you begin to wonder where you went wrong.

First, keep in mind that it’s not your fault. Some roosters are more prone to aggressive behavior than others. Factors like hormones, genes, breed, and individual disposition all play into reasons why your rooster shows aggression. However, it’s essential to deal with an aggressive rooster before things get out of hand and another chicken or a person is injured.

Here at Freedom Ranger Hatchery, we’ve raised chickens for over 15 years. We have seen our fair share of aggressive roosters and want to provide you with the information you need to ensure you have happy, healthy chickens. As always, if you have more questions about roosters or are ready to order more baby chicks for your yard, contact us.

Why is My Rooster Getting Aggressive?

Most roosters aren’t aggressive, but you may notice signs of aggression when they start to go through puberty, which can be as early as four months old. Remember that a rooster’s job is to service and protect the flock, so anything he perceives as a threat to the livelihood of his community could prompt him to pick a fight.

Since chickens are prey animals, they may perceive anything new or out of the ordinary as a threat, and they will fight to their death to protect their flock.

Having an aggressive rooster doesn’t mean you did anything wrong while raising him. Some chicken breeds tend to be more aggressive, like Cornish Indian Game. This hereditary inclination toward aggression dates to when cockfighting was invented and used as a sport, starting way back in 500 B.C. It wasn’t until more modern times, about the 19th century, that cockfighting was frowned upon, and many people realized its cruelty.

Just like how some people tend to have a “mean-streak” or have issues with their anger, chickens can also have a personality of being aggressive. All this information says there is virtually very little you can do to prevent or cause aggression in your male chickens. Sometimes it happens, but you need to learn what to look for and what to do if you notice attack signs.

If you’ve had your rooster for a long time, and it suddenly shows signs of aggression, particularly towards hens, that may indicate a health issue that needs addressing.

What are the Signs of Aggression in a Rooster?

Rooster attacks can happen quickly, so it’s crucial to be able to spot the warning signs that your rooster may begin attacking. Some signs to watch for include:

You mustn’t show fear if you notice these signs of aggression. They can sense your hesitation and use that to fuel their aggressive behaviors. In addition, never be violent toward an aggressive rooster. Not only is it cruel, but it only confirms to the rooster that you are a threat that they must handle.

Are Some Chicken Breeds More Aggressive than Others?

Yes, some chicken breeds are more aggressive than others. Breeds that tend to show more aggression are traditional breeds used for cockfighting; for example, the Cornish Indian Game, Malay, Modern Game, and Shamos.

The Cornish Indian Game shouldn’t be confused with the Cornish Cross broiler chickens we have here at Freedom Ranger Hatchery. However, two breeds we do carry—the Rhode Island Red and the Guinea Fowl—may show more signs of aggression than our other breeds.

How Do You Train a Rooster Not to Attack?

When you’re looking for an aggressive rooster solution, you may find websites or people who claim to be able to tame a rooster. However, most of those methods are inhumane and go against our beliefs that chickens should be respected and allowed to roam free, just as nature intended. Some folks believe that violence, holding the rooster upside down, or using a vinegar/water mixture in a spray bottle can help establish your place in the pecking order, but these methods are cruel and can harm the rooster.

If you raise your roosters from day-old chicks, it’s vital that if you notice him starting to peck you that you try to stop it. He’s trying to establish his dominance and will only get worse as time goes on.

You can also pick up your male chicks in front of the hens, pet them, and feed them treats from your hand when interacting with your flock. This pattern establishes that you are the treat-giver and not a threat. Sometimes roosters just need time and patience to realize the difference between chickens and humans.

How Do You Deal with an Aggressive Rooster?

When tending to your flock, you should do a few things if you notice signs that a rooster is aggressive. First, be sure to give him space. Don’t walk directly towards him or stare directly at him. The rooster may interpret these actions as a threat, and he may try to flog, spur, peck, or chase you.

As you can see in this picture, the spurs on the back of their legs are razor sharp and can injure you. If you are injured repeatedly or feel like you may be injured, be sure to take precautions when around your rooster. Wear long pants, long sleeves, boots, and gloves as a good precaution. Also, be sure to keep pets and small children away from the aggressive rooster since they can also get hurt.

If all else fails, and you have an aggressive rooster that constantly attacks you or hens, then it may be time to find a place where his protective instincts are better used. He may do better in an area that has more land for him to protect his flock.

For More Answers to Your Questions about Aggressive Roosters, Contact Freedom Ranger!

While we know that dealing with aggressive roosters isn’t what you imagined when you pictured your backyard chicken farm, they can still show this behavior. It’s important to know why your rooster is aggressive towards hens or humans and what you can do about it.

At Freedom Ranger and its family of hatcheries, we believe that respecting chickens and humanely raising them is the only way to care for them. If you have any questions or want to know more aggressive rooster solutions, please feel free to contact us!